Back to my roots 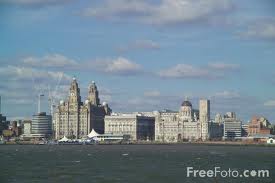 Home is where the heart is, so they say, and as my husband and daughter live with me in London then that is undoubtedly my home. London is my home by inclination as well, and the things which a lot of non-Londoners dislike about the city – noise, busyness, number of people – are lifeblood to me. Although I wouldn’t mind slightly cheaper houses. However, I’m a Scouser by birth, and not a Londoner, and my parents and several close friends still live in Liverpool, which means that a small piece of my home, and therefore heart, remain in the amazing city I was born and spent 18 years in.

I’m writing this post at my parents’ dining table, shortly before going to the station to catch my train back down South. I’ve just had an amazing few days catching up with the people I love up here, and am feeling rather sad at the prospect of leaving. Although also looking forward to seeing my husband, who didn’t come up this time, and to seeing how the mice have been getting on in my absence. Probably started legal proceedings to claim squatters’ rights.

The overwhelming thing which always strikes me when I’m back in Liverpool is the friendliness and warmth of the people. I was in the Liverpool branch of Cath Kidston yesterday, buying a laptop sleeve, if you’re interested. In the few seconds it took to process my credit card payment, I’d exchanged life histories with the girl on the till. She was genuinely excited about the fact that I’m about to have a book published; I was interested to hear about her ambitions to move to London and study art. In my experience that level of easy friendliness with strangers is very uncommon in London, and I didn’t find it particularly prevalent in Oxford or Birmingham in the three years I spent living in each of those cities respectively. Slightly subjective analysis, and rather limited scope for a truly scientific study, but I’m going to ignore that and press ahead with my conclusion that there is something particularly special about Liverpool.

Anna and I have both been spoilt to death by my parents – lie-ins, roast dinners, homemade cake (me), endless stories, new books and clothes, lots of loving attention (her); and the free babysitting on tap which enabled me to have a fabulous day catching up with friends.

N, with whom I’ve been friends since we met at nursery aged 3, lives in New Brighton now, so I had a lovely trip to the seaside in the almost-Spring sunshine for lunch, some girly pampering (my third ever manicure!) and a lot of chat. New Brighton has changed a lot since my nanna used to take me there as a little girl – still amazing sweeping views over the Mersey estuary back towards Liverpool, but now a whole pile of trendy bars and restaurants to go with it. The guy who did my nails was making me rather jealous by describing how he walks his dogs for miles along the beach every morning – the one thing which challenges my commitment to London living is the temptation of living by the sea.

I then hopped on the train back to Liverpool city centre and did a little light shopping in the brilliant Liverpool One with my birthday vouchers. I love Liverpool One as it combines indoor and outdoor, shops and leisure opportunities, the new space with the old, far more effectively than most modern shopping centres, meaning that it feels like a real living space, rather than a soulless temple to the gods of retail, and has enhanced Liverpool city centre, rather than detracting from it. Coincidentally, my ex-next-door-neighbour in London was part of the team of architects which designed it.

I then got the bus down to a little neighbourhood Italian, Santino, on Smithdown Road (not far from Penny Lane, for those whose geographical knowledge of Liverpool is mainly influenced by the Beatles), and met J, J and L – friends from secondary school, which scarily means that we’ve known each other for over 2 decades now. I don’t see them very often, but there’s a lovely relaxed familiarity with people you’ve known for so long, and we had a really fun evening. Although I did get into trouble with the chef for being unable to finish my huge portion of delicious linguine ai gamberi.

And then, in a further hark back to my schooldays, my dad picked me up, and as I went home and to bed, awash with sentiment and Pinot Grigio, I pondered a little on the emotional difficulties, but also the privileges, in having two cities I call home.

This darling little weirdo cat of mine will spurn roast chicken or salmon. Last night's sea bass didn't even merit the twitch of a disdainful whisker. But he loves him a pulse. I have found him in the past sitting in the sink eating the kidney beans draining in a colander there, and he is very partial to a few baked beans too.
Which one of them looks more content? Proper Sunday afternoon vibes. (The 6yo whirlwind has been taken to the park by her BFF's dad, hence the relative peace chez nous).
Posting our cards to @sadiq @luisaporritt @sianformayor @shaunbaileyam as part of the @mumsforlungs campaign, asking them to prioritise clean air in our city if they get elected as mayor.
That green with that pink and that blue! It really elevates a quick after school trip to the playground.
Bluebells on the (extremely chilly!) school run.
My children, back in their natural habitat, The Bookshop @waterstonesliverpool