Wake up and smell the roses

Things have been pretty quiet on the blog lately. Like many people, I have been in something of a state of shock following the result of last month’s referendum. I’m not exaggerating to say that it feels something like a bereavement, and at the moment I am caught somewhere between anger and denial in the stages of grief.

In my more optimistic moments I can’t believe that we will do something as cataclysmic, as momentous, as disastrous, as leaving the EU on the basis of a very close result following such a horribly untruthful and misleading campaign. Leaders of the Leave campaign have already reneged on their promise – a promise they knew they could never keep – of an extra 350 million a week for the NHS.

I am so angry that the Remain campaign didn’t challenge the entire premise of this referendum. EU citizens living in Britain could not vote in it. Ex-pat Brits living in EU countries could not vote in it. 16 and 17 year olds could not vote in it, despite their futures being very materially at stake. We had no idea what we were voting for, because no-one (still) has the vaguest, remotest idea what Brexit will look like. Such a flawed plebiscite surely cannot justify such an enormous step, and one which the majority of the MPs we elect to make such decisions, do not support.

In a country that suddenly seems motivated by hate and fear, with an economic, political and social future which looks uncertain at best, bleak at worst, my blog which is deliberately small-scale and domestic feels trivial, inconsequential, even pointless.

And yet…When under pressure to cut funding for the arts in order to support the war effort, Winston Churchill riposted “But then what, exactly, are we fighting for?”. There are many reasons for believing that Britain’s future is brighter in Europe, but my own reasons for desiring it so strongly are very personal, relating to peace and security and opportunity for my children, and the delight I feel in living in a city, a country, which welcomes the world. The kind of things, in other words, that I often blog about.

My other reason for continuing to blog about the little things, is that these are what keep me sane. When the bubble of anger and panic gets too big to contain and my head and chest feel like they are going to explode, then kissing my babies, or baking a cake or smelling a rose helps me regain a little perspective.

We went to Polesden Lacey yesterday as a birthday day-out treat for my husband. It’s a gorgeous National Trust property in Surrey, a Regency period house which was bought by a Mrs Greville and transformed into the ultimate location for delightful and decadent Edwardian house-parties. Edward VII himself was at Mrs Greville’s first house-party in 1909, a few years later the Duke of York (subsequently George VI) honeymooned there. If you ever wondered what life was like inside Downton Abbey, this is the place to go.

There are also utterly beautiful and spectacular gardens, including the most lovely rose garden I think I have ever seen.

We braved the rain for a 90 minute walk from the local station (lack of car ownership can be a bit of a drawback when visiting National Trust properties!). Anna found an Enid Blyton book she hadn’t read before in the second hand bookshop. The rain cleared enough for us to enjoy our picnic (complete with four different types of cheese, houmous, Cava and strawberries), and to explore the gardens. Then the children went off to the play area, and I got to immerse myself in period drama land inside the house itself. By this time we were all pretty shattered, and very relieved to discover a mini-bus back to the station! 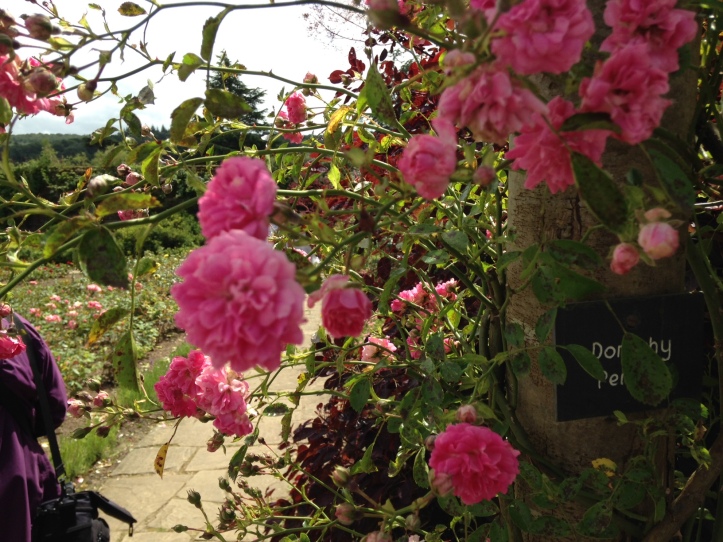 I am still angry. I have never been more angry. And I think we have to be angry. We have to keep fighting. We have to make the positive case for Europe and inclusion and openness. We have to fight hatred and racism and xenophobia. But I think, probably, we also have to carry on living our lives and smelling the roses.

My first child-free night for over 18 months, so OF COURSE I woke up at 7am. At least it means all the more time to enjoy beautiful sunny Oxford. But first, breakfast.
Yesterday I promised my 12yo we would redecorate her bedroom this summer, and we decided on a seaside theme as she just loves the sea. Today, browsing magazines before a 3 hour train journey (by myself! Luxury!), I saw @homestylemaguk had a feature on coastal room schemes!
Lovely day at @rhsbridgewater. Had to take a bee picture as I'm in Manchester! 🐝
If anyone was thinking of buying the paperback of A THOROUGHLY MODERN MARRIAGE today could be the day - Amazon have put it on special offer. Authors have no control over when they do this, or for how long, but it's happening right now! Link in bio.
We made it! First time we have seen my brother and SIL @makemydaycreative since last August. We escaped the pings, and after a hot, slightly stressful journey I am now sipping Pimms in their garden. Happy times.
Thanks for all the publication day love, everyone. My talented 12yo made me this delightful cake (chocolate mud cake with whipped cream and gorgeous book cover icing topper ordered online!) - @nadiyajhussain she is totally inspired by you since first seeing you on Jnr Bake Off.