In one of my very earliest blog posts I wrote about sewing – how I wish I’d learnt more from my grandmother while she was alive, and how I’d recently read a novel by Amanda Addison and been inspired to try some simple sewing projects.

Well, fast forward nearly a year, and not much sewing had happened. Somehow there always seemed to be something else to do – gardening, writing, launching a book, looking after my daughter, and sewing never got a look in.

However, I recently bought three old wooden chairs from a local furniture recycling project, and was inordinately proud of successfully sanding and painting them, and re-covering the fabric seat of one. I now have the eclectic, mismatched dining furniture I wanted, for  a bargain price. I also had some blue spotty Cath Kidston fabric left over from the seat re-covering, and when I found some spare cushion pads in the loft, I had a lightbulb moment and decided that the two could be combined to give me both a nicely manageable sewing project and some extra cushions for the dining room sofa.

I haven’t got a sewing machine – I did contemplate buying one last year when I started thinking about sewing, largely because John Lewis had such pretty ones in gorgeous shades of duck egg and scarlet, but common sense intervened and I realised that given my level of skill and time commitment it wasn’t going to be even remotely good value. Sewing two small cushions by hand seemed manageable, but I didn’t feel very confident about zips, so decided to look online for a pattern which didn’t require them. And I found one.

My husband was away for work on Monday night, so instead of watching something rubbish on telly I decided to employ my time in a creative and fulfilling way by getting cushion number one underway. I am not a particularly patient person (I hope if my parents and husband are reading this they aren’t eating anything at the time, I don’t want them to choke), and I do slightly tend to take the view that instructions are for wimps and just getting on and doing something is the best way to get it done. Can you see where this is going?

The thing is, although this approach serves me pretty well with a lot if things, cooking for example, I did have a feeling that I needed to be a bit more precise with sewing, so I really, really tried to measure carefully and think before I cut anything. And it seemed to work. I had three carefully hemmed and pinned pieces of fabric, which did combine to look something like a cushion cover. So I started stitching them together. Yesterday afternoon I only had one seam to go, and, being as I mentioned naturally impatient, I decided to turn it right side out to see what it was like. Oh dear. I’m still not totally sure what I’ve done wrong, but it certainly doesn’t look quite like a cushion cover. I think that I’ve sewn the little flappy bit on the wrong end.

But it doesn’t look big enough for the cushion either. I can’t really see a way around it other than unpicking everything and starting again (which doesn’t hugely appeal, to be honest), but if you’re reading this and you can sew, do let me know if you can suggest a solution! Otherwise, I’m thinking that I could just do a rough hem and then give it to my daughter as a doll’s sleeping bag.

Onwards and upwards as they say. A positive is that in my garden, which is my other new project, the runner beans, strawberries and herbs are thriving, the tomatoes and sweet peas are at least still alive and we perhaps don’t need to discuss the courgettes or the marigolds in any detail. 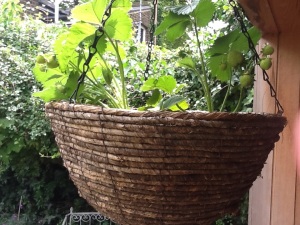 Day 16 - Saturday. This Saturday looks like a 5 mile walk to a Cotswolds country pub, whilst on a mini break celebrating 22 years together with (and 11 years married to!) this lovely man.
Day 12 - Make. My 12yo is obsessed with #GBBO and likes to bake along each week, so she makes cake in cake week, biscuits in biscuit week and so on. Tonight is desert week, and she made treacle tart. I am very excited as it's a real favourite of mine.
Day one of @theclotheslineie Magic of October challenge, and the prompt is #Autumn. Today was very autumnal with slanting rain and swirling winds this morning and sparkling sunshine this afternoon. Along with Anne Shirley, I am also very glad I live in a world where there are Octobers.
When you're trying to do some work at your laptop but a certain tabby cat wants a cuddle instead. He can just about cope with my attention not being on him if I am doing moving around jobs like cleaning, cooking etc, but as soon as I sit down I am HIS.
'Mummy, can we make an apple pie after school today?' Yes, my love, we can! The house smells delicious now, all cinnamony and autumnal. The only decision left to make is cream, ice-cream or custard? (I'm Team Custard all the way)
I'm just a girl, on a train, with no attendant children or bags of snacks and sticker books, heading off to have lunch with one of my absolute best pals. Wearing a lovely new dress from @mutha.hood. Happy Saturday!