On the Third Day of Christmas

I’ve blogged before about my frustrations with pregnancy tiredness and lassitude, and nowhere has that been more true than with regard to my writing. I launched my second book, To Have and to Hold in June – luckily this was all finished, bar a few edits, before the blue line in the pregnancy test appeared – and would have hoped that five months later my third book would be well under way. It hasn’t quite worked like that. For a start there have been many days when my body saw me sitting down as a cue for instant, overwhelming sleep, and so I could virtuously settle myself down with my laptop only to wake two hours later with keyboard imprints on my face. And then there was the problem of what to write

The book I started, with a plot which had been spinning around in my head for a long time, focussed on three couples experiencing the miseries of fertility problems and miscarriage. It’s a subject close to my heart, and in large part I think I had planned the book as catharsis; a way of coming to terms with the babies I had lost, and coping with the fact that my much-wanted second child might never be born. When I was lucky enough to become pregnant, this subject suddenly felt far too loaded. I struggled on for a few chapters, but always ended up depressed, anxious, in tears or, frequently, all three. The combination of hormones, my ongoing anxiety that this is indeed too good to be true, and that something will go wrong with my pregnancy, and an emotive storyline proved too much for me. I decided to shelve that project, at least for the time being. The characters are still in my mind, and I have a feeling that I’ll come back to them one day, but now is not the time. 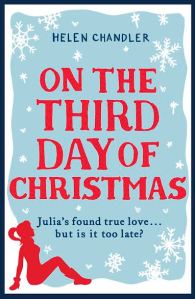 So, if not that, then what? Almost without thinking about it I decided that a short story would be the perfect project and, as Toby and Julia, the lead characters from my first book Two for Joy are very close to my heart, it seemed natural to return to them. At the beginning of Two for Joy they are both thirty, and the reader discovers that they have been friends since meeting at university 12 years earlier. There are a few hints and flashbacks throughout Two for Joy, but the entire time I was writing it I felt that I knew Toby and Julia’s back story, just as clearly as I know my own or that of my friends. And so I wrote it down. As readers we share Julia’s trip down memory lane as she reflects on the Christmas she has just spent with Toby, and what it might mean in the context of 12 years of their friendship and romantic near-misses. The result is a short story/novella called On the Third Day of Christmas which will be published as an e-book on 4 December 2014 (coincidentally just a few days away from my due date!), and is available to pre-order now. I hope it will appeal to anyone who has enjoyed Two for Joy, but it is also a stand-alone story.

As for Book Three, well, I do have a new idea I’m working on, but there’s absolutely no way that the book is going to beat the baby. And although it’s nearly six years ago, I do seem to remember that life with a newborn isn’t exactly conducive to literary endeavour. Or getting dressed, washing your hair, brushing your teeth, leaving the house etc etc. So I am going to award myself a few months of maternity leave from writing, although I will continue to blog when time and sleep levels permit. When I emerge from the fog of the early stages it will be brilliant to have something all lined up and ready to work on. I definitely found that having one child increased my motivation, efficiency and productivity, so am hoping that a second baby will have a similar effect. In which case I could be looking at a third book by my baby’s first birthday. Watch this space…

Somewhat shamefully, given that it is a 20 minute walk from our house, this is our first visit to the @morrisgallery since the 8yo was a toddler. I even wore a Morris-esque print in honour of the occasion.
Took the 7yo with me on the March of the Mummies this morning. I want her, and my 13yo daughter, to grow up in a world where there isn't a gender pay gap, where childcare doesn't cost a working family more than their housing, where dads get to play an equal part in raising their children, where adoptive parents aren't penalised, where women don't have to terminate a wanted pregnancy because they can't afford childcare.
Scampering through the autumn leaves in Calderstones Park, stop for a hot chocolate, and then helping Grandad make a bug mansion (bug hotels are so passe!) back at home. Gorgeous October.
Compulsory Pride face glitter selfie!
Girls' weekend in Brighton. Champagne, cocktails and carousels, an early(ish) morning swim, the Pride parade, a mooch around the shops, sitting in the sunny courtyard garden, bleary pyjama-clad pastry eating round the kitchen table, getting all dressed up to go and eat delicious Italian food and listen to drag queens doing karaoke. Spending time with some of my favourite humans in the world.
We had lunch @pizzaexpress on Saturday, and my 6yo was very taken with the competition on the Piccolo menu to compose some Christmas song lyrics. She has come home and given it a lot of thought, before coming up with this (to be sung to the tune of Jingle Bells). The prize is a family meal at Pizza Express, and she is very excited about winning it and getting to take us all out for dinner. Not winning hasn't really occurred to her as a possibility...