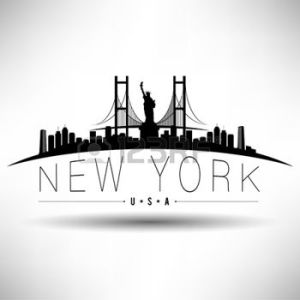 A bit of an odd one this. Unlike Cornwall, where I have been every year since I was nineteen, I have only had one ten day trip to New York in my life. But I just had to include it, because I love the city so much that just thinking about it makes me happy. If the Cornish seaside means calm and peace, then New York means exhilaration and excitement; the champagne cocktail of cities.

Our trip to New York was probably the highlight of our DINKY life. We went for my twenty-sixth birthday. It was just before we bought out first house, but after we’d both progressed fairly well in our careers, so our disposable income had never (and never has since) been higher. We spent the first week in a fairly bland Uptown hotel. Being New York, though, we were on something like the thirtieth floor, and three sides of the room had floor to ceiling plate glass windows. Obviously the view was incredible, but the windows were actually something of a mixed blessing. My birthday is February, and New York was having a cold snap, so it was -8 degrees celsius outside. On our journey from the airport we quickly learnt that cold in New York means a whole different thing to cold in London and, even though I thought we’d packed sensibly, our first stop was still at Bloomingdales to buy thermal underwear and (fake) furry hats. Glamorous or what.

Even though having the blinds in our hotel room down would have conserved heat, I couldn’t bear to lose that view for a second. Instead we layered up to go to bed. Thermal vest, thermal long-sleeved t-shirt, thermal long johns, flannel pyjamas and a jumper over the top. Never let it be said I don’t know how to woo my man on a romantic holiday. It was so worth it, though, just to lie in bed with that living canvas spread out before us, and be able to see it every time I half woke in the night. I have never felt so alive. One morning we went down to the market in Grand Central station and bought muffins and freshly squeezed orange juice for breakfast, bringing them back to eat in by Our View. Another evening we bought takeaway pizzas on our way back to the hotel and ate them at midnight in bed in all our layers.

We took a carriage ride round Central Park, went to the top of the Empire States Building, had brunch in Bloomingdales, bargain-hunted in Macy’s, window-shopped on Fifth Avenue, ate cupcakes from the Magnolia Bakery, walked over the Brooklyn Bridge, saw a Broadway show, had pizzas in Little Italy and pancakes with crispy bacon and maple syrup in a diner, took yellow taxis and the subway, and rode the Staten Island Ferry. Every touristy thing you could imagine. We also spent our last three nights in the original and best of boutique hotels, the Soho Grand, and had cocktails in the lounge and room service breakfast in bed.

I am desperate to go back to New York, but I can’t see it happening any time soon. I don’t enjoy flying at the best of times, and transatlantic journeys with two young children can’t really be said to be the best of times. I also know that Anna is only just getting to an age where she would begin to appreciate it, and Sophia is still a long way off. Not to mention the cost of taking all of us to New York; these days we do have a mortgage and only one salary. So, for now, New York is somewhere I daydream of, gaze longingly at when I watch re-runs of Friends or curl up with Breakfast at Tiffany’s, and long to visit again one day when circumstances allow.