I had wanted a pet ever since our dog died when I was about nine, but first parents and then husband weren’t keen. The mouse infestation proved the incentive husband needed to change his mind, and just over two years ago we adopted kittens, Henry and Percy. 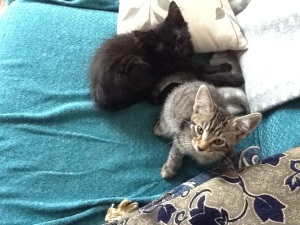 From the start they were very different characters. Percy was an escape artist – as a tiny kitten, before he had had his vaccinations and was allowed outside, he managed to climb out of the bathroom window which I had left open a fraction, and scramble down the drain pipe. As soon as he was allowed out he would spend most of the day away from home, hunting and exploring. Then maybe two or three days at a time. Then he would only come home if it was raining. And for the last few months he hasn’t been home at all. I assume he is getting fed elsewhere, or has just adopted a totally feral lifestyle. We’ve done all the usual things to try and trace him, and he is microchipped, but to no avail. I just don’t think he was suited to a domestic cat lifestyle. 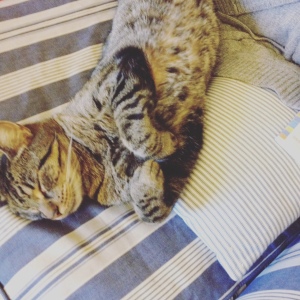 His brother Henry, by contrast, seems to think he is a dog. Certainly no-one has ever told him that cats are supposed to be independent. He is the most home-loving cat you can imagine. He isn’t supposed to go in the bedrooms as husband is slightly allergic to cats, and so I don’t want fur all over the beds. One evening when I was out, husband had gone into the bedroom and started ironing shirts. Henry miaowed outside the door for a while, cross at being left alone, but then subsided. A few minutes later he felt claws on his shoulder and a satisfied purring in his ear. Henry had gone downstairs, out of the catflap at the back, climbed over the wall and then up the drain pipe and in at the open bedroom window because he really didn’t like being left on his own.

If we go out at a time he wasn’t expecting we always come home to find him sitting in the hall waiting for us. 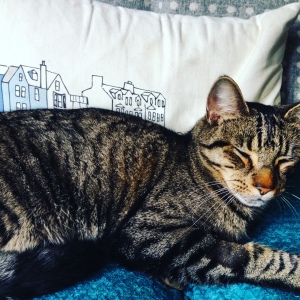 He is incredibly gentle and loving with Sophia, for which I am extremely grateful, and submits to all sorts of affectionately meant abuse. In fact he seems to welcome it, because he is well able to climb out of her way but rarely chooses too.

He tolerates his veterinary-approved, eye-wateringly expensive dry cat food, but his true love is Whiskas Chunks in Jelly. Opening a pouch of that brings him at a sprint from any corner of the house. He turns his little nose up at fresh chicken, salmon or sardines. He’s not even that partial t milk or cream. But Whiskas is his opium. He really should be on a TV advert for it.

He is satisfyingly cuddly, sometimes overly affectionate if I am trying to type or eat, and he is equally determined that all my attention should be firmly on him. If I have Anna on my knee for a story he will try and insinuate himself between us. He does

relaxed and somnolent like you wouldn’t believe, and just watching him sleep can relax me.

The kittens came to live with us just after Anna started school, and the timing was incredibly fortuitous. At that point I’d had several miscarriages, and then had some tests which seemed to show it was unlikely I would ever be able to carry a healthy baby to term. My deep longing for a second baby seemed doomed to remain unfulfilled, and the house suddenly very empty with Anna out of it for six hours each day. The kittens, especially Henry, brought some life and warmth and cuddles when I most needed them, and they needed me which was 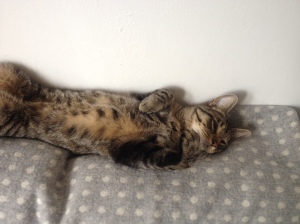 I am a little sad that Percy has chosen not to live with us, but trying to make a fireside cat out of him always felt slightly like trying to keep a robin in a cage. But Henry is the most loved and loving of domestic cats, and I am so happy we have him.