I absolutely definitely do not have time to write this blog post! We are off to France for a week on Saturday, and I have a lot to do to get ready. It is a home exchange holiday, so in addition to all the usual pre-holiday prep of packing and so on, we also have to leave the house in tip-top condition for our guest family. And, of course, the children need feeding, watering and entertaining as usual. Just to make life even more fun, our drinking water went off this morning, and so I spent quite a lot of time I definitely did not have boiling and cooling water, and organising an emergency plumber. And then a lady from First Utility called to have a matey chat about my kilowatt unit costs and how I could be reducing them. It felt too important to hang up, but wasn’t how I’d envisaged spending 20 minutes of Sophia’s precious nap time!

However. If I don’t write my March books up today, then it won’t happen until mid-April, so I have despatched Anna to tidy her bedroom (possibly for ‘tidy’ read ‘curl up on her bean-bag and listen to her Paddington CD), and Sophia is in her cot. The chatting and burbling indicate that she is in no way asleep, but I am choosing to ignore that for the time being and call it nap-time. So, March books here we go. 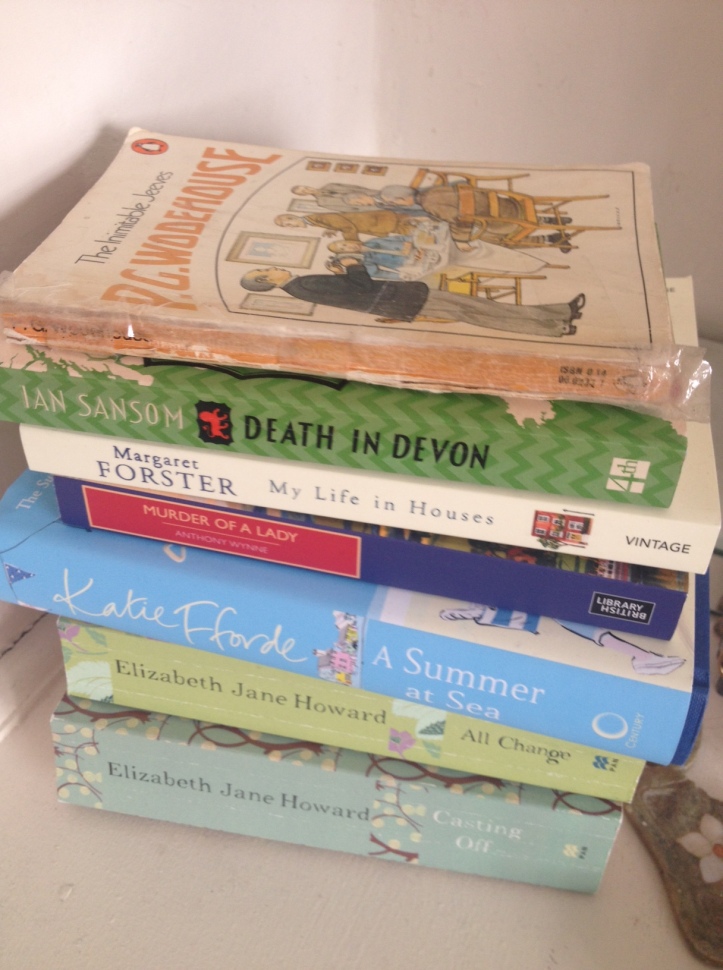 Casting Off  and All Change by Elizabeth Jane Howard

It feels like a long time since I finished the final two novels in Howard’s amazing family saga, right back at the very beginning of March. Having absolutely loved the first three in the series, these two definitely did not disappoint. We follow the lives of the Cazalets into the social change and economic uncertainty of the years immediately following the Second World War. The characters whom we met as children are now grown up, many of them with children of their own. The intimacy of the writing is such that every turn of the plot feels like news or gossip about old friends. “Ooh, Polly’s had twins!” or “Thank goodness Hugh has met someone else at last.” or “I always thought that Wills was probably gay”. I absolutely loved, loved, loved these books, and know that I will return to them again and again.

A Summer at Sea by Katie Fforde

Katie Fforde is one of my top go-to authors for romantic escapism and comfort reading. I can also report *gets ready to boast* that she is an absolutely delightful person. I met her at the Romantic Novelists Association awards when my own book, Two for Joy was short-listed for Contemporary Novel of the Year a couple of years ago. Sadly I didn’t win, but it was fantastic to meet Katie, and she was kind enough to say that she had really enjoyed my books, which was a fantastic compliment. Anyway, a new Katie Fforde is always cause for celebration, and although I buy most of my books in our fantastic local Waterstone’s, when I saw this on special offer in Sainsbury’s as I did the weekly food shop one rainy Monday morning I just couldn’t resist.

Emily, the central protagonist, is a midwife – a career I seriously considered myself for a while – so it was particularly interesting for me. As always, Fforde has obviously done her research very thoroughly. Throw in some beautiful Scottish Highlands scenery, a heavily pregnant best friend and a ruggedly handsome Scottish doctor, and you’ve got a total feel-good read which I thoroughly enjoyed.

Murder of a Lady by Anthony Wynne

I don’t like writing negative reviews. I understand very well just how much effort goes into writing a book, and it feels downright churlish to publicly tear all that to pieces because it doesn’t meet your personal taste. I would never say I enjoyed something I didn’t, but prefer to operate on the principle of ‘if you can’t say anything nice, don’t say anything at all’. In this case, though, the author has been dead for many years, and so is unlikely to be hurt by my saying that this was one book I just couldn’t finish. I got about half way through, but found both characters and plot so implausible I was actually looking for excuses not t0 read! I decided enough was enough, and just skim-read to the end to discover whodunnit. I won’t be counting the book as one of my 52, but I have included it here for completeness.

My Life in Houses by Margaret Forster

After not enjoying Murder of a Lady I was looking for something to really get my teeth into, when this book by Margaret Forster caught my eye on a display in Waterstone’s. I still had book tokens from my birthday, so was able to treat myself, and I’m really glad I did.

The book does what it says on the tin. It is an account by Forster of every house she lived in during her nearly 80 years. She was born in a  two-up, two-down council house in Carlisle, and ended up with two homes, one in affluent Dartmouth Park on the borders of Hampstead Heath in London, and a holiday home in the Lake District. The book covers the personal – the story of her family, education, marriage, children, career and the illness which ultimately killed her, and the socio-political – how our homes and what we expect from them has changed over the course of the 20th and early 21st century.

Forster’s personality shines through her vivid descriptions, and so it was particularly poignant reading it just a few weeks after she died. The enormous importance and significance of ‘home’ to her is also something I feel very strongly myself, and so there was that fantastic chord of recognition which is one of the chief pleasures of reading.

Death in Devon by Ian Sansom

I wasn’t sure if I was going to love or hate this book before I read it.  It is the second in a new series of detective fiction set in the 1930s. They are a very deliberate ironic pastiche of the Golden Age crime novels I love so much, and at first I wasn’t sure if I would find the satire annoying. In the end, I didn’t. I felt, rightly or wrongly, that it was an affectionate, ironic satire, rather than a biting attack, and I enjoyed it. The narrator, a Spanish Civil War veteran, is highly likeable, and the plot was cleverly thought out, with a shock ending in the best tradition of Golden Age fiction. I will definitely be looking out for more books in this series.

The Inimitable Jeeves by P.G.Wodehouse

I had a bit of a Wodehouse-fest last month when I wasn’t well. Thankfully I haven’t had tonsillitis this month, but we did have an evening with a financial advisor talking about life insurance. The intellectual effort of trying to bend my mind around figures and statistics and probabilities and the pros and cons of different models, combined with the existential horror of contemplating a scenario where I am a widow with two young children, or my babies have been left motherless or orphaned meant that by the time our (very nice, helpful, friendly and intelligent) financial advisor left, I was in no fit state for anything but a mug of hot Ribena, bed and an instalment of Jeeves and Wooster. That made everything ok again.

Compulsory Pride face glitter selfie!
Girls' weekend in Brighton. Champagne, cocktails and carousels, an early(ish) morning swim, the Pride parade, a mooch around the shops, sitting in the sunny courtyard garden, bleary pyjama-clad pastry eating round the kitchen table, getting all dressed up to go and eat delicious Italian food and listen to drag queens doing karaoke. Spending time with some of my favourite humans in the world.
We had lunch @pizzaexpress on Saturday, and my 6yo was very taken with the competition on the Piccolo menu to compose some Christmas song lyrics. She has come home and given it a lot of thought, before coming up with this (to be sung to the tune of Jingle Bells). The prize is a family meal at Pizza Express, and she is very excited about winning it and getting to take us all out for dinner. Not winning hasn't really occurred to her as a possibility...
Happy 1st of December! (I hope I haven't set the bar so the children expect a novelty breakfast every morning of Advent...)
Inset day for the 6yo, so we have headed to Wonder Lab at @the.science.museum which is one of our favourite trips together. Exploring resistance, bridge-building, tesselating patterns and centripetal force.
This is what getting ready to go and see Nanna and Grandad for half term looks like in 2021!