Social media mean that inspirational statements, or cliches, or truisms – I think the terminology depends on how cynical you’re feeling that day – are everywhere. Some of them are more than a little twee. Others I really do think we can learn from. And, of all of them, the one I really feel I need to apply is the one about life not being about waiting for the storm to pass, but learning to dance in the rain. 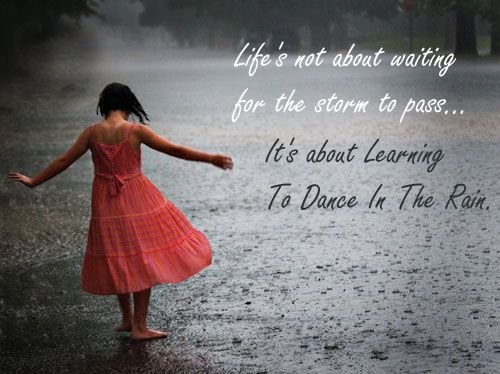 This weekend, the warmest and sunniest May weekend on record, has involved a lot of dancing in the rain for me.

It started inauspiciously on Friday afternoon. I had just settled Sophia for her nap and was about to work my way through a huge list of jobs which would leave the house organised and gleaming and me free to enjoy the weekend. Then my mobile rang, and I heard the dreaded words “Is that Anna’s mum? I’m calling from the office at school…”

Anna had an infected toe, apparently. I wasn’t massively sympathetic at first, assuming that it would be a blister from her new sandal.Only after she got home and I peeled back the plaster to take a look did I realised that it probably was infected, and I needed to a) be a bit nicer and b) take her to the doctors. By the time of our appointment, two hours later, she couldn’t put her foot on the floor without extreme pain. I ended up wheeling her round to the doctors in Sophia’s buggy, whilst carrying Sophia in the sling. I really appreciated the warm weather that walk.

We were prescribed antibiotics, so I manoeuvred us all to the chemist, and then home. We dosed Anna up, and then made the most of the sunny evening and my husband being home early to have shop-bought pizzas and salad for tea in the garden. And I managed not to fret about the list of undone jobs or Anna’s sore toe, or the fact that I hadn’t made the pizzas myself from scratch, and just enjoy that experience. It helped that I couldn’t see the chaos inside the house.

Poor Anna’s foot got worse and worse, and she had a really horrible night. Of all the plans we’d made for Saturday – husband had work to get done, we wanted to make the most of the weather, I still had all the housework to do – two of the family spending the morning in A&E wasn’t even on the short-list, but that’s what Anna and my husband ended up doing anyway. I tidied up a bit, and worried a bit more, and then realised that there was no point Sophia and I being stuck at home for the sake of it. I had missed breakfast in all the kerfuffle, so I decided that Sophia and I would walk round to our local cafe together. She enjoyed the walk. I enjoyed the freedom of being out without a pram. And we both enjoyed the babycino, apple and rhubarb juice and chocolate muffin. Yes, I know, she shouldn’t have had any chocolate muffin, but it was only a little bit. I was still worried about Anna, and felt sorry for them being stuck in hospital, but I also enjoyed a little window of self-indulgence with Sophia.

That evening my friend was due to babysit while husband and I went out for dinner. I agonised over whether Anna would be alright, but she was so exhausted after her broken night the night before that she was asleep as soon as her head hit the pillow. We were only going out locally, so decided to risk it, and I left my friend with a cup of tea and lots of admonitions to phone us if she was at all worried.

Husband and I enjoyed a glass of prosecco in the evening sunshine, and had just placed our food orders when my phone rang. Anna was still fast asleep, but it was Sophia who had woken up, inconsolable and seemingly in pain. I raced home to administer Calpol, breast-milk and reassurance, before sprinting back to the restaurant once she’d settled to sleep once more. We managed to finish our dinner and get home before she woke up again a couple of hours later. An unconventional model for a romantic night out and, given that I wore heels for the first time in months, I could have done with a bit less running, but I’m still glad we had that blissful hour sitting together in the sunshine.

By yesterday it was clear that Sophia had an ear infection. Anna’s sore toe had already put paid to tentative plans for a trip to the seaside in any case, and so we settled for a quiet day at home. Husband finally got his work done. Sophia was feeling so poorly she had an epic three hour nap, and Anna and I got to watch an episode of ‘Just Add Magic’ – her new favourite TV programme, and bake a cake together. Then with everyone Calpolled to the max, we put the littlest one in the pram, and the bigger one in the buggy, and wheeled them round to the garden of Vestry House Museum – our favourite local spot, and where we held our wedding reception – for a picnic. It was blissfully peaceful, and Anna lay and soaked up some sunshine, Sophia toddled happily on the grass and tried to eat daisies, even though she’d refused all other food all day, and I ate lots of grilled aubergines stuffed with goats cheese from our fab local Italian deli.

My tendency is to think that I will relax and enjoy myself as soon as. As soon as the house is tidy. As soon as I’ve lost a stone. As soon as Sophia is sleeping through the night. As soon as the weather gets better. As soon as whichever child is poorly at that moment gets better. This weekend I spent Friday afternoon carting a sick child and a grumpy baby to the doctors. Friday evening and night looking after a sick child who was in so much pain it made my heart ache for her, and debating with my husband if/when we should take her to hospital. Saturday looking after baby and tidying house while worrying about sick child. Saturday evening, which I’d been looking forward to for weeks, was interrupted by sick child #2, giving me someone else to worry about. Sunday was at home with two poorly girls whilst everyone else in the whole world (or on my Facebook feed anyway) was at the seaside.

But I actually managed to enjoy the windows of time between crises, and appreciate them all the more for their brevity, rather than writing the whole weekend off and planning to have fun next weekend, as soon as. Learning, in fact, to dance in the rain.