Sophia was eighteen months old last week. To celebrate, we went for a blood test. However, once that was out of the way, I decided we should make the most of being out and about in London on a sunny day.

We popped into M&S to buy a picnic lunch, and then hopped on the tube to Green Park. Sophia was thrilled to have the chance to run free and chase pigeons, unrestrained by pesky hand-holding or reins. That’s pretty much all she ever wants to do.

Then I heard music coming from Buckingham Palace, and headed over to investigate. I’m not sure, but I think we caught the end of the changing of the guard. It was certainly something very ceremonial with a brass band and lots of soldiers in dress uniforms and bearskins. I pointed all this out to Sophia, but she was too transfixed by the bin lorry she’d spotted to take much notice.

We fought our way through the crowds of tourists on the Mall to St James’ Park, and had our lunch on a bench over-looking the lake. This was a huge success because two of Sophia’s favourite things are ducks and dogs, and there were plenty of both to spot. Okay, so sometimes the ducks were actually swans, but there’s a whole fairy story about how that’s an easy mistake to make.

After lunch we went round to the playground. It’s a really great playground in St James’ Park, and I used to take Anna a lot before she started school, but it does get very busy at the weekend, which is a shame. Last time we were there I was about three months pregnant and feeling very sick and tired, so sat pallidly on a bench whilst husband ran round with Anna. Two years later and I was running round myself with the result of the pregnancy. I can’t quite believe how the time has flown. 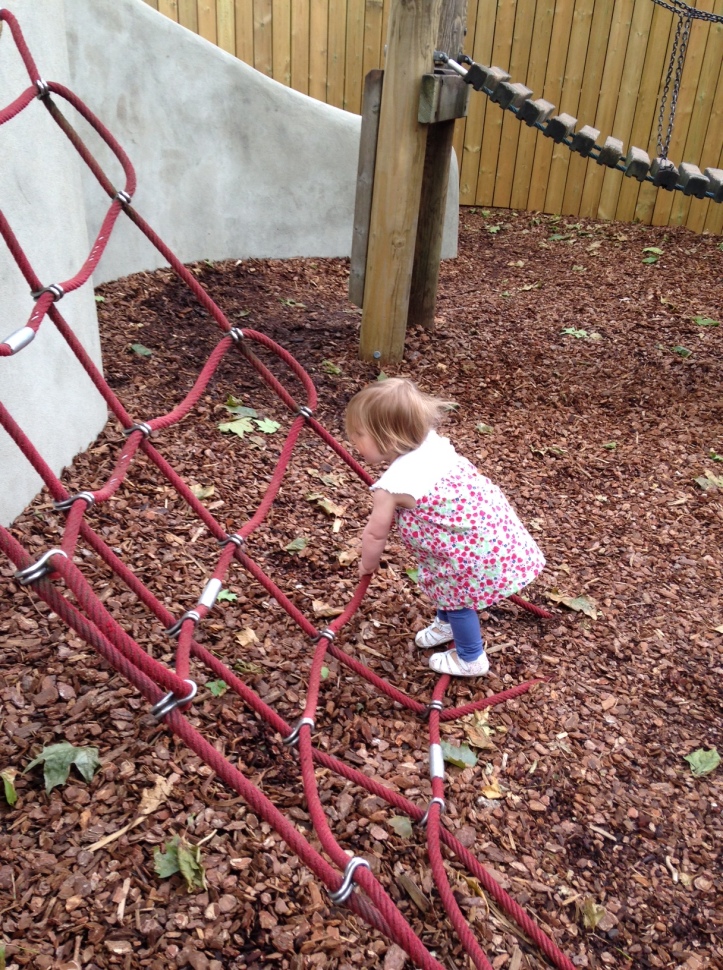 My littlest girl is so determined and so fearless and so resolutely independent. Qualities which I hope will stand her in very good stead in later life, but make keeping her safe as a toddler (and I imagine, heaven help us when the time comes, as a teenager) quite a challenge. There was a big slide, far too steep for me to let her go down by herself, especially as it was just the two of us so there would be no-one to catch her at the bottom. So I took her down on my knee. She absolutely loved it, laughing and squealing with sheer delighted excitement. Then she saw a little girl of about four going down with her mum, side by side, holding hands. That was it, nothing else would do for Sophia, and for the next approximately forty-two times we went down the slide side-by-side.

By this time she was shattered, so I popped her back in her buggy for a nap, and walked through the park, up the Mall, through Trafalgar Square, up Pall Mall East, and through Piccadilly Circus. I love seeing London through tourist eyes and feeling proud because this is my city. I had a lovely browse in Waterstone’s, and then checked out the Cath Kidston sale in their flagship store on Piccadilly but resisted buying anything. I feel I need some credit for this as both a little red leather handbag and a gorgeous flowery dress, which I spotted back in the new Spring catalogue and have been lusting over ever since, were reduced. Not by enough for my budget though. I’m going to have to play Sale Roulette and see if they come down any further or sell out first.

By a miracle Sophia was still asleep when we got back to Walthamstow, so I bought a drink and a chocolate brownie in a little local cafe which has outdoor tables, and had a peaceful fifteen minutes reading my book in the sunshine before she woke up.

An absolutely perfect day with my lovely girl. Sophia at eighteen months is feisty, determined, active, adventurous, independent, strong-willed, mischievous, joyful, enthusiastic, loving and absolutely gorgeous. Can’t wait to see how many of these personality traits continue as she grows up.