Why I love the NHS

It’s been another one of ‘those’ weeks. Sophia woke up with a temperature on Saturday, and all our plans for the weekend vanished in a puff of smoke. True, those plans hadn’t been wildly exciting ones – focussed mainly on finally taking the sides off Sophia’s cot and transforming it into a Special Grown-Up Girl Bed, and doing a mini-revamp of her room at the same time, and maybe popping into central London for a meander round, a little bit of Christmas shopping, and a pizza. Instead, I watched Peppa Pig DVDs on loop. 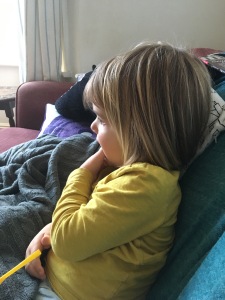 By Monday I was getting a bit worried as her temperature was still very high, and she wasn’t really eating or drinking. I phoned our GP’s triage number, and they advised me to bring her in, giving me an appointment for an hour later. The GP who we saw was also worried that she was dehydrated, and told me to take her to A&E. Paediatric A&E was almost literally bursting at the seams – the waiting room ended up being standing room only. Half the children were battered, bruised and broken from school playground injuries, and the other half were poorly babies and toddlers nestled forlornly on parents’ laps, in much the way Sophia had been with me for the last three days straight.

Despite their busyness, the lovely nurses took lots of time to coax and encourage Sophia to drink some water – the most she’d had all day. She revived almost instantly. As she happens to be a child who gets more hyper the tireder she is, as the time crept on past her bedtime she became completely manic. We still had to wait to see the doctor, but now I had the child running crazily round the waiting room, looking the very picture of health.

Obviously I was glad that she was feeling better. But in the circumstances I did slightly wish she could look a little sicker. However, I knew that the inevitable consequence of me leaving without seeing the doctor would be an instant and possibly catastrophic relapse in the carpark.

We finally saw the paediatrician on duty. A man who had undergone years and years of education and professional training, punishing shifts and heaven knows what stress in order to be able to tell me that my now perfectly healthy seeming toddler had a viral throat infection. The sore throat presumably being why she didn’t want to drink, and the virus causing the temperature which in turn exacerbated the dehydration. But he shushed my apologies for wasting his time and told me that I hadn’t, dehydration can be serious in small children, and it was important that she was checked. He persuaded Sophia to drink some more, and rewarded her with a teddy.

Unfortunately it seems that my stubborn little girl will only deign to drink when directly instructed to do so by a highly qualified health professional. Mummy just doesn’t cut it. So I’ve spent the last two days using every bribe, threat and stealthy stratagem I could think of to get her to drink. When I haven’t succeeded she has been such a poorly, limp, grey little bundle it is heartbreaking. When I have succeeded it has been with some sugar laden horror which I will no doubt spend the next month trying to wean her off, but, at least, so far, we have avoided another hospital trip.

But there you have it. Yet again, when I needed the NHS they were there in spades, with warm, caring, professional staff bending over backwards to provided the best care possible for my daughter and reassurance for me.

In a completely different storyline, last week I saw my GP because, despite my efforts at self-help, anxiety is a demon which I’m just not succeeding at beating. She referred me to the local mental health service for CBT. 48 hours after the GP appointment I had a phone assessment. Five days after that they phoned to offer me a 16 week course of CBT, starting tomorrow. My biggest fear was being made to feel a nuisance, a hypochondriac, a waste of time, and that just didn’t happen. I was taken just as seriously as I would have been if I’d gone in with a clearly defined physical problem like a sprained ankle, and the treatment is just as prompt and, I am hoping, will be just as effective.

There is no doubt that the NHS is stretched. Years of austerity politics have imposed direct financial challenges, as well as an increase in workload caused by cuts to social services and cuts to benefits leaving people cold and hungry and vulnerable and the NHS having to pick up the pieces. However, don’t believe the insidious propaganda from a right-wing Government and a right-wing press which imply that the NHS is no longer up to the job of providing 21st century healthcare, and that we have no alternative but to adopt some kind of private system or top-up instance, or parachute private healthcare companies in to ‘save’ the NHS (and no doubt make a substantial profit in the process). The NHS is coping because it has brilliant and committed  staff. If the pressures caused by austerity eased then it could be even better. We don’t need anything else.

And as a counter to the ‘private sector good, public sector bad’ school of thought, I will briefly outline my only other consumer experience this week. I attempted to buy a new gas cooker. I ordered it from John Lewis, and arranged to have it fitted and the old one removed one day this week. This would be through Hotpoint, the manufacturers of the cooker. Yesterday at 4pm I got a call from Hotpoint to arrange the fitting. Which would be fine, except that I had already been told it would be fitted yesterday. Instead I was being offered dates next week or the week after. And it would actually be several visits – one for a gas engineer to disconnect the old oven, one for the delivery guys to bring the new one and take the old cooker away, and a third for the gas engineer to return to connect the new cooker. I would have to make myself available at home from 7am – 7pm on the chosen day. There is no way of narrowing down the time slot, and no way of streamlining the process to avoid separate three visits.

I am paying for this ‘service’, I am a customer with free choice, and, in using John Lewis I felt I was exercising this choice for a fairly high end option which should be fairly stress-free. Wrong! At the time of writing I have no new cooker, and no date booked for the cooker already purchased to be delivered, as for one reason or another, I find it rather hard to be continually available at home for 12 hours straight on a day of someone else’s choosing, and with the prospect of no doubt endless stressful phone calls as I am bounced backwards and forwards between John Lewis and Hotpoint, and put on hold to listen to tinny muzak.

Funnily enough, at no point during this process, will I wish that private companies like these could take over our beloved and crucial ‘free at point of need’ NHS.