Every year. Every year it gets me. Every year I am frankly smug at the beginning of January. We’ve had a lovely Christmas, but now it’s time to get back to real life, new year, new goals, new excitement, new challenges. Ok, so it’s cold now, but come on people, spring is just around the corner. Fast forward three weeks (Or three years? Who knows?) and I’m just over it. Over the freezing cold, the (still) dark mornings, the (still) dark evenings. The fact that a child’s request to go to the playground fills me with horror, so we either have over-energised children bouncing off the walls inside, or I go and spend 30 minutes freezing the very marrow of my bones so they can run some of it off.

There’s been a lot going on this January as well, which makes it feel longer I think. Some of it has been pretty rubbish. My husband’s office was broken into not once, not twice, but three times in the space of a week, and the police didn’t seem even remotely bothered. Running a start-up can be stressful enough at the best of times, and having three lots of computers stolen, three lots of replacement doors and locks to organise and pay for, three lots of reports to make to police officers who don’t even have the time/inclination to see you in person, three lots of insurance reports to file doesn’t exactly decrease that stress. Luckily he has a fantastic team, and they all really pulled together and kept on with business as usual, but I found it quite frightening to see just how deep the cuts to policing have bitten.

I have been having a flare-up of my ankylosing spondylitis which hasn’t been much fun. Looking back, it is something which often seems to happen in January. I don’t know if it’s eating a lot more red meat and sugary food over Christmas, or the hard work that goes into creating a lovely family Christmas, or just the cold weather, which always seems a bit of a trigger for me. Either way I have been feeling a bit sorry for myself with a sore foot (plantar fasciitis, which is very common with AS) and really bone-aching fatigue. One week I basically spent all the time my youngest was at nursery lying on the sofa to try and conserve energy for when I collected her, and subsequently I have felt much better than that, but still having to be very careful to manage my energy levels as even quite a normal level of exertion can wipe me out.

We saw an optometrist about my eldest’s eyes, as she is having problems with her distance vision which is not corrected by appropriate lenses. One possibility is that she has Irlen’s Syndrome (sometimes called Visual Stress Disorder), which is a problem with the brain’s ability to process visual information, rather than an issue with the eyes themselves. It isn’t the same as dyslexia, although around 50% of people with dyslexia are thought to be affected, and it can cause blurred vision, or the words to seem to move around the page. It seems likely that she is affected by that to some degree, but equally not all her symptoms are explained by this, so we are now awaiting an ophthalmologist appointment for further tests, which is all a bit worrying.

And then just a few days ago my poor Henry Cat was attacked by a vicious marauding cat in our garden, and has a nasty bite on his ear, which needed a hasty trip to the vets and now some antibiotics. 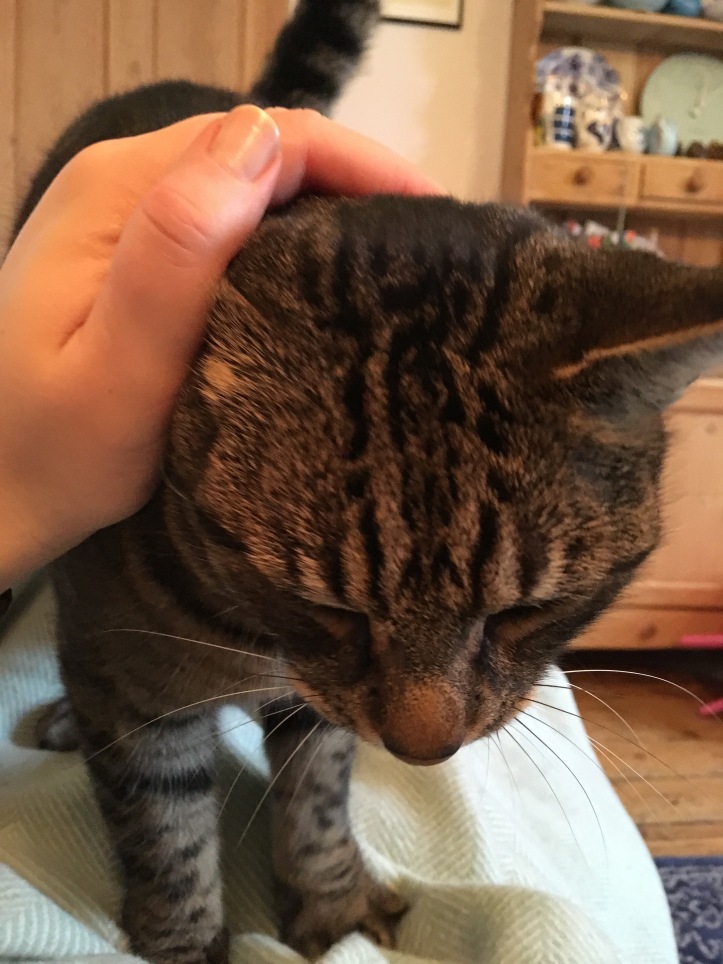 So all in all, nothing awful, but a bit of a feeling that things are rather relentless. However, in between all this, we have also been making the most of January with a positive whirl of social and cultural activity!

Our Christmas present to our 9 year old was tickets to see Matilda, the hit West End musical. my MIL had agreed to look after the 4 year old, and we went to see a matinee on Saturday, followed by a ‘grown-up’ dinner out. I had read really good reviews, and my little book-worm daughter adored the original Roald Dahl story, so I thought we were probably onto a good thing, but I was taken aback by how absolutely amazing it was. It was very well adapted, and the script, music, lyrics and choreography worked so beautifully together that it was an absolute sensory delight. I’d go again in a heartbeat. 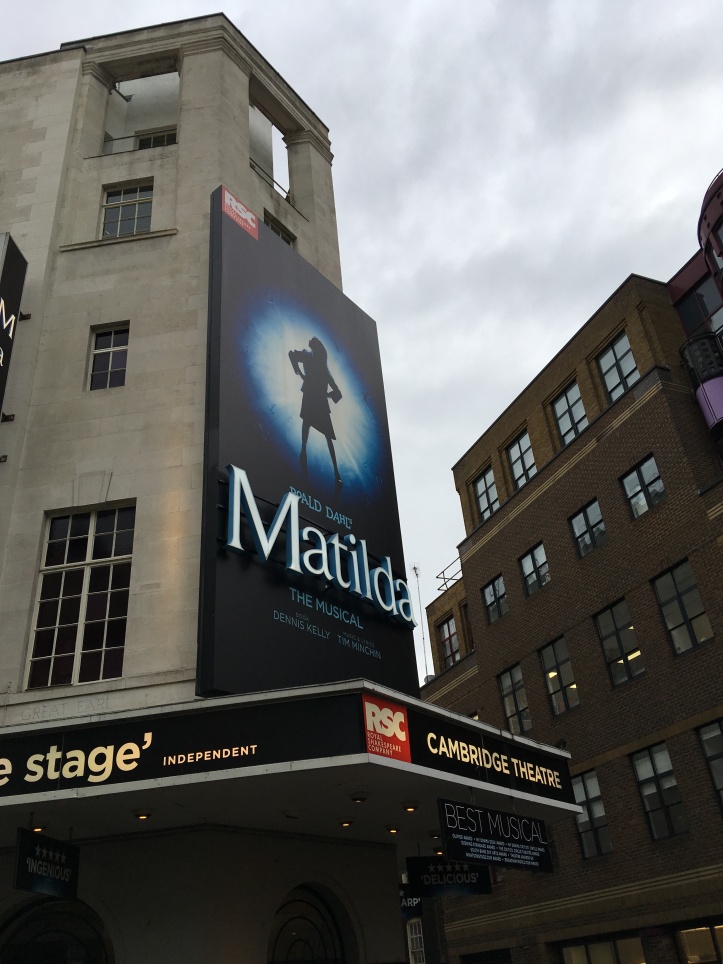 My MIL had also decided to give ‘experience’ gifts this Christmas – tickets to a comedy show for my husband, and for a live cinema screening of the National Theatre’s Richard II for me. Coincidentally these were on consecutive nights just a couple of days after we saw Matilda! We saw James Acaster performing a brilliant one-man show in the West End, and then the next night had a complete contrast with some Shakespeare. Being somewhat (ok, totally) out of touch, I’d never heard of James Acaster, but he was absolutely hilarious. And as most of his show related to either Brexit or Bake-Off it was almost uncannily appropriate for us. Richard II was one of the plays I studied for A-level, and I don’t think you ever get to know any text quite like your A-level ones, so I have very strong opinions on Richard, and I wasn’t totally sure about this production. Simon Russell Beale was magnificent as Richard, and the language and themes are so powerful, poignant, thought-proving and relevant that it’s hard to go far wrong. However, I didn’t love the production which was based around the conceit of all the characters being continually shut up together in the same windowless room, in very simple modern costume. As many of the characters also doubled up it had the slightly disconcerting feeling of a GCSE Drama production in the school sports hall.

We also went as a family to see an exhibition at the British Library called Cats on the Page; which was a quirky and sweet look at the role of the cats in literature, both for adults and children. I love cats, and of course I love books, and some of my children’s favourite books – Slinky Malinki, Tabby McTat, Mog,Gobbolino, Atticus Claw, TS Eliot’s Cat poems – have featured feline protagonists that it was equally enjoyable for all of us.

Less cultural, but we also had an impromptu snowball fight in the street one bedtime, when the snow started falling thick and fast at about 6.30pm and miraculously settled. I decided trying to put them to bed under those circumstances was like holding the tide back, and most of my neighbours clearly thought the same as the front doors all opened and streams of excited children poured out. I’m so glad I was spontaneous as it was pretty much melted by the next morning. Which is pretty much my ideal snow – come quickly, look pretty, allow some rosy-cheeked, wholesome making of childhood memories, go again before getting grey/slushy/icy/necessitating days off school! 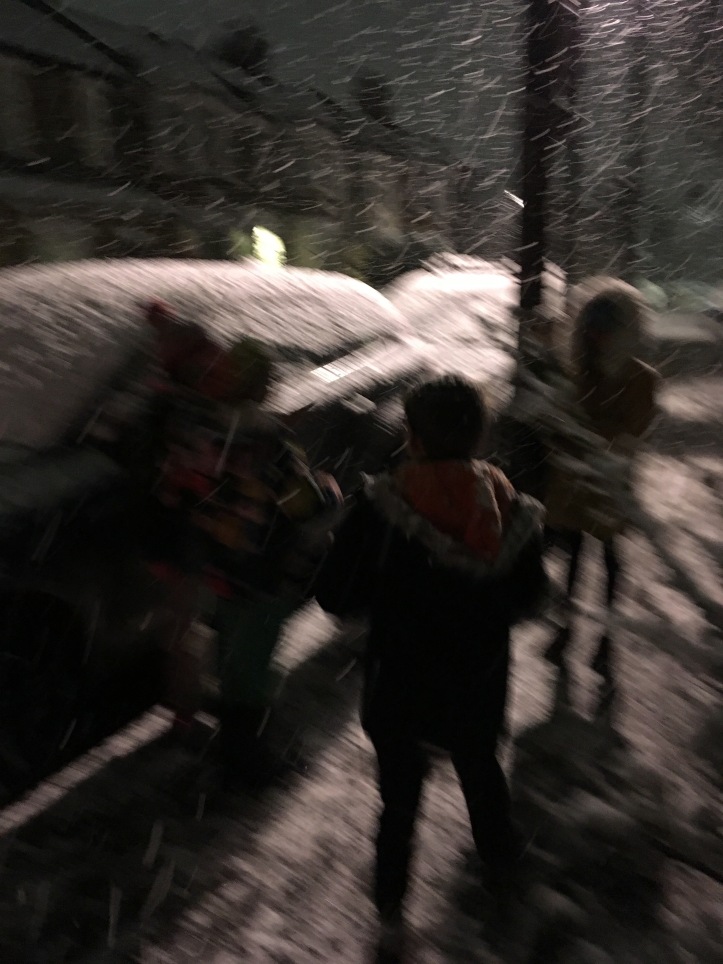 We’ve also had friends we haven’t seen for ages over for dinner, and I had a lovely catch-up brunch on the South Bank with two friends from university last week, so there has definitely been more good than bad.

I’ve also treated myself to a great selection of new books with some Christmas money I got, so I’m doing well with my 2019 reading challenge so far, and will be reporting back on January’s choices at the end of the week.

Beautiful flooded fields (the biggest muddy puddles in the world, according to my 5yo) as we try and make it from London to Liverpool for half term. 4 hours in and we have made it to Stafford. Via Birmingham, Nuneaton and Coventry (twice!). Wish us luck... #stormdennis #scenicmidlands #arewenearlythereyet
It's my birthday today, and I am entering my last year as a thirty-something really feeling the love. My family and friends are just amazing, and at the risk of sounding smug I really couldn't ask for anything more to show for nearly 4 decades on this planet. #happybirthdaytome #thisis39
And the snowdrops are here. It's the return of new life to the wintry world, and the return of flower spam to my Insta feed. #snowdrops #signsofspring #newlife #flowerspam #ihavethisthingwithflowers
I have written an ode to joy, a celebration of everything I love and value about Europe and being a European. "Britain may officially leave the European Union today, losing much of our influence, protections and freedoms as we do so, but nothing can change simple geographic fact: we ARE Europeans, and Europeans we will remain. I hope with all my heart that this is au revoir and not goodbye." #iamaeuropean Link to full post in bio. #odetojoy #europeanunion #europhile #eu #jesuiseu
I had to have a pneumonia vaccine this morning, and for some reason I totally blacked out immediately afterwards. One minute I was saying to the pharmacist 'I feel a bit faint...' and the next thing I knew I was lying on the floor! They phoned my husband to come and get me, and he brought me home, tucked me up in bed, did a very rainy school run and is now attempting to finish his day's work from home whilst supervising the children and making tea. He's a good 'un. I still feel a bit woozy and nauseous when I move, so have decided the best thing to do is stay in bed for now. For my health, you understand. Meanwhile my 5yo has made me a get well card, and brought me up a pile of her picture books to read and one of her teddies to cuddle. The back of the card has a list of her favourite memories of me - 'playing games, having cuddles, doing painting'. ♥️ She's a good 'un too. #luckymummy #luckymama #myfamily #unplannedduvetday
Musings about the future of my blog today - link in bio. Would love your thoughts and feedback. #blogging #mummyblogger #whatnext #bloglife #blogging