The icing on the cake

As promised (threatened) last week, the subject of this week’s post is the production of a very large number of cupcakes for my book launch tomorrow night. Did I mention, by the way, that my first novel IS PUBLISHED TOMOROW!

It is Anna’s full day at nursery on a Wednesday (9am-3pm) and so when it became clear that my original carefully considered plan of making the cakes a few at a time and freezing them hadn’t worked out, then I decided to just blitz it today in the six hours I had to myself. When I woke up at 2am this morning I realised that I actually had no idea at all how long it would take to make, ice and decorate 12 batches of cupcakes. A long time, I can now confirm is the answer.Just looking at the pile of ingredients was a little daunting. 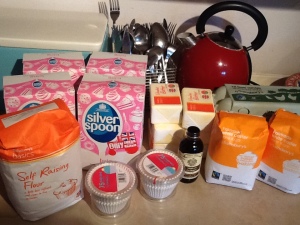 However, I set to work. I discovered with the first batch that my top oven emphatically does not work for sponge cakes. OK, fair enough, I would just have to stick to doing them two trays at a time. It was fine. Unfortunately I burnt the last twelve – rookie mistake of checking, deciding they needed a couple of minutes longer, not setting the timer and then…twenty minutes later, hmmm, what’s that funny smell? 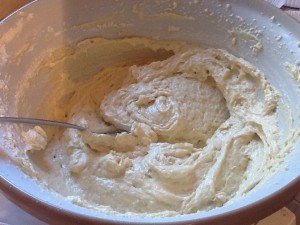 I’d had a lot of fun deciding how to decorate the cakes. The convention with cupcakes at the moment seems to be for swirls of buttercream, which looks amazing, but I’m pretty terrified by piping bags, and decided icing 12o cupcakes like this would be several steps too far. I therefore got inspired by Nigella – in How to be a Domestic Goddess her fairy cakes are iced with fondant style icing, and they look fabulous. I also decided to follow Nigella’s advice on aesthetics; she suggests pale pistachio green with a pink rose, and as that chimes with the colours of my book cover, it seemed an obvious choice. I wanted two different styles for contrast, though, so eventually I decided on pale blush pink with white daisies. 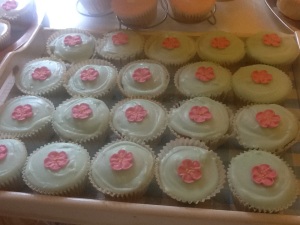 I got the last tray iced with just minutes to spare before going to pick Anna up, and when we got home we road-tested a couple as a post-nursery snack – funnily enough my daughter was far more willing to help mummy out with this than with tidy-up time -and feedback was extremely positive. 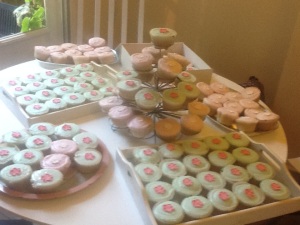