“Only connect” said E.M.Forster, and the connections which are made possible by social media are something that make me very happy. This is not a fashionable point of view. There are several prevalent attitudes to social media. One is that it actually makes people unhappy, because they are constantly comparing themselves to others, and Facebook, Instagram et al put an unrealistic gloss on the mundanities of life. Another is that the ‘traditional’ social media, like Facebook which I love, are now totally over, and the world has moved on to heaven knows what. I don’t know, and probably won’t until my daughters are teenagers and can patronisingly explain it all to me. Others worry that social media stops us connecting in real life, and that we are having relationships with our laptops and smart phones rather than our family and friends.

There is probably some truth in all of these, but I don’t let it worry me. As a stay-at-home mum and writer – both fairly solitary jobs – social media is a total godsend to me. This blog lets me get things off my chest with a good old rant, and records day-to-day moments for me to look back on. A paper diary could also do this, of course, but I love the sense of connection which I get from sending my thoughts out into the blogosphere, the lovely comments and feedback I get in response to my posts, and the ways in which my life is enhanced by other people’s blogs. Chiswick Mum has become a blogger friend, and I look forward to her beautifully written and photographed posts about her West London life and adventures with her young son just as much as I might look forward to coffee with a Real Life friend. Mostly Yummy Mummy  is a full-time mum-of-four in Yorkshire, and she’s like my online life coach for beauty tips and fashion inspiration. Local (to me) mum and blogger Katie is a fantastic source of brilliant recipes to tempt my occasionally fussy big girl, and, hopefully, to instil a love of good food in my little one. Holly Bell’s blog is also fab for this, and I love her chatty and breezy writing style. Through blog posts I’ve been privileged to gain a small insight into how it feels to parent a child with special needs, live with cancer, move your family onto a narrowboat, emigrate to Australia or cope with infertility. I feel that access to the blogosphere widens my world and horizons just as much as traditional media, and I am certainly no more likely to be distracted from my real life and long-suffering children than I would be reading the newspaper, and less likely than when I’m in the middle of a good book!

On days when, as this Monday just gone, things are feeling a bit of an uphill struggle, Facebook gives me a chance to moan and offload, and get some realtime feedback which makes me feel I’m not totally alone with my grumpy teething baby, attention-span-challenged 6 year old and the sticky bits of 500 paper chains, which are not on the paper chains or in the packet, but stuck to me, the children, the cat and every surface as far as the eye can see. I also like the little uplift I get when I see someone I was at school with has had a baby, or announced their pregnancy, or got a new job or met a new bloke. Yes, I know people put a positive spin on things, and I can see why if, for example, you had just had a miscarriage someone announcing their pregnancy would hurt you. But then it probably would in real life too. Even on bad days, I generally feel that someone else’s good news will cheer me up as I can be happy for them even while feeling sorry for myself.

Social media has practical benefits too. What do a set of Miffy books, some doll’s house furniture, a vintage sideboard, an apple slicer and a wicker Ikea children’s chair and some Joules wells have in common? They’re all things which I have got either for free, a couple of quid or a packet of biscuits on Walthamstow Sell or Swap Facebook group in the past few months. I’ve also made a couple of hundred pounds myself, selling baby gear Sophia has outgrown, or clothes I have (sob) outgrown. Brilliant bargains, less stuff going to landfill and the chance to make real, live connections with neighbours I wouldn’t have met otherwise. What’s not to love? 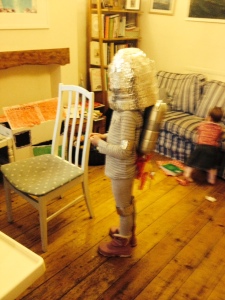 A panicked Facebook plea when Anna announced she needed an astronaut’s costume for school led to my next-door neighbour coming round with the loan of the (amazingly creative) jet-pack he had made for his son’s space party a few months ago. Silvery grey leggings and tshirt, a pudding bowl, a roll of insulating tape, some foil and a bit of swearing and some pink moon boots I picked up on Sell or Swap, and Astronaut Anna was ready for take-off!

Somewhat shamefully, given that it is a 20 minute walk from our house, this is our first visit to the @morrisgallery since the 8yo was a toddler. I even wore a Morris-esque print in honour of the occasion.
Took the 7yo with me on the March of the Mummies this morning. I want her, and my 13yo daughter, to grow up in a world where there isn't a gender pay gap, where childcare doesn't cost a working family more than their housing, where dads get to play an equal part in raising their children, where adoptive parents aren't penalised, where women don't have to terminate a wanted pregnancy because they can't afford childcare.
Scampering through the autumn leaves in Calderstones Park, stop for a hot chocolate, and then helping Grandad make a bug mansion (bug hotels are so passe!) back at home. Gorgeous October.
Compulsory Pride face glitter selfie!
Girls' weekend in Brighton. Champagne, cocktails and carousels, an early(ish) morning swim, the Pride parade, a mooch around the shops, sitting in the sunny courtyard garden, bleary pyjama-clad pastry eating round the kitchen table, getting all dressed up to go and eat delicious Italian food and listen to drag queens doing karaoke. Spending time with some of my favourite humans in the world.
We had lunch @pizzaexpress on Saturday, and my 6yo was very taken with the competition on the Piccolo menu to compose some Christmas song lyrics. She has come home and given it a lot of thought, before coming up with this (to be sung to the tune of Jingle Bells). The prize is a family meal at Pizza Express, and she is very excited about winning it and getting to take us all out for dinner. Not winning hasn't really occurred to her as a possibility...