Just three weeks ago I blogged about how January wasn’t too bad after all. Clearly I was too smug, too soon, because I am now suffering from January blues along with the rest of the Western world. It is such a long month! Christmas already feels several lifetimes ago, and there is still another week of January left!

It is dark when I drag myself out of bed in the morning, and getting dark by the time we get home from school pick up. When it’s wet playtime at school Anna comes home a bundle of frustrated energy, and it is just too cold and gloomy to face taking her to the park to run it off (it’s not me who doesn’t want to stand around in the freezing cold twilight, you understand, it is because I have to consider what is best for Sophia), so she comes home and runs it off in the house instead.

I’ve had a mini flare up of a long-term health condition, which isn’t at all serious, but has left me feeling completely run-down and exhausted – not helped by a teething baby waking up several times each night. Anna came down with a cold last week, which she has now passed on to me, and, judging from the amount of baby sneezes this morning, to her little sister as well.

The fact that I spent half my housekeeping budget for the month in the first few days of it as we entertained friends and treated ourselves to celebration meals (and bottles of fizz) over New Year is now coming back to haunt me now, and we’re definitely going to be living off the contents of the freezer and the store cupboard for the next week. I will be googling imaginative things to do with lentils, tinned kidney beans and corned beef shortly.

I’ve been trying to keep positive and optimistic, because there were still good things going on: Sophia has started walking, which is exciting, and we have booked a home exchange holiday to Paris and Marseille at Easter which I am looking forward to soooo much, although it seems light years away at the 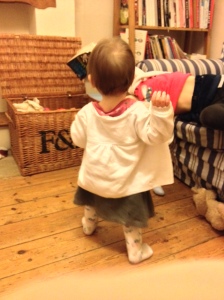 moment. This morning, though, my husband had a meeting with his accountants to finalise his tax return, and they casually informed him that his employer have been using the wrong tax code all year, and so he owes an extra £3,000 in tax, payable right now. That was the moment when I had to put up my hands and concede defeat. I’ve fought it, but January has got me.

So roll on February. Not everyone’s favourite month, I admit, but I like it. My birthday is in February, it’s Pancake Day, Valentine’s Day and half term – lots of little treats to look forward to – and the mornings and evenings should be getting lighter all the time. The level of hibernation I’d really like to go right now for isn’t possible with a six year old who needs to go to school each day and an energetic almost-toddler, both of whom insist on a certain amount of feeding, washing and entertainment,  but please excuse me if I spend as much time as humanly possible for the rest of this month in my pyjamas, wrapped in a blanket or duvet, eating the last of the Christmas chocolate and moaning to anyone unwise enough to attempt to engage me in conversation.