All quiet on the blogging front

I realised this morning just how long it is since I blogged here. Life has very much been getting in the way. Some of that has been positive – I’ve done a bit of decorating and enjoyed a beautifully relaxed half term with my family, and some hasn’t been quite so good as I’ve had some ongoing health issues. There is also the undeniable fact that it is really easy to get out of the habit very quickly!

So, this is a bit of a round-up post.

Anna had an INSET day at the beginning of half-term, so we thought we would take advantage of a day when lots of schools were still in to head to Brighton when it would hopefully be quieter. Brighton is one of my favourite UK cities (others, if you’re interested, being Liverpool, Oxford and Edinburgh), and we always have a lovely time there. Unfortunately I was feeling incredibly tired. I have a kind of inflammatory arthritis called Ankylosing Spondylitis (AS), and fatigue is one of the symptoms. Thankfully it isn’t all the time, but when it hits it is that kind of stop-you-in-your-tracks exhaustion that  is normally associated with a bad attack of flu or early pregnancy.

What that meant in practice, however, was that I was forced to sit in Choccy Woccy Doo-Dah’s amazing cafe (a place so awesome I had to include a scene set there in my first book, Two for Joy), and imbibe a mountain of melted chocolate with delicious dippy bits while my husband took the children to play on the beach. 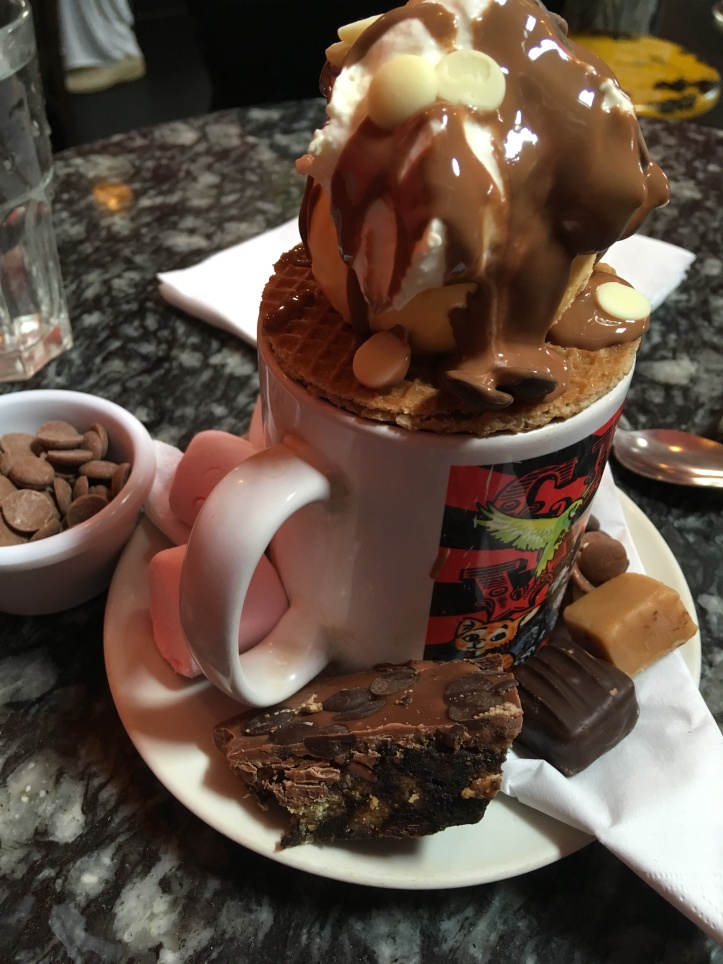 It’s not often I am defeated by chocolate, but I couldn’t manage to finish this, much to the children’s delight when they came back to meet me and got to hoover up the remains! We had a laid-back meander through the Lanes, some Lebanese flatbreads for lunch, and then Sophia fell asleep in her buggy and napped while I sat with her on the pier and gazed at the sea, and husband took Anna on the fairground.

The next day wasn’t quite so pleasant, as I spent a large part of it in Moorfields Eye Hospital A&E. Another delightful element of AS is that it can cause serious eye problems which need immediate treatment to avoid your sight being damaged in the long-term. I had had a niggling ache in my eye for a few days, which suddenly got worse, and so off to A&E I had to go. Thankfully it was only a relatively minor infection, but it took a while, several examinations and some rather painful eye drops to reach that conclusion.

After that we were off to Liverpool to stay with my parents for a few days. For once, heading Up North meant that we got the best of the weather, escaping the horrendous thunderstorms and torrential rain in London, and getting some lovely warm sunshine. We had a really nice few days, taking the children to Southport to the miniature railway village and to the newly refurbished playground and soft play extravaganza at Otterspool, and going out for a proper afternoon tea, as well as just hanging out in the garden. I also got the chance to have dinner and a catch-up with two of my lovely school friends. 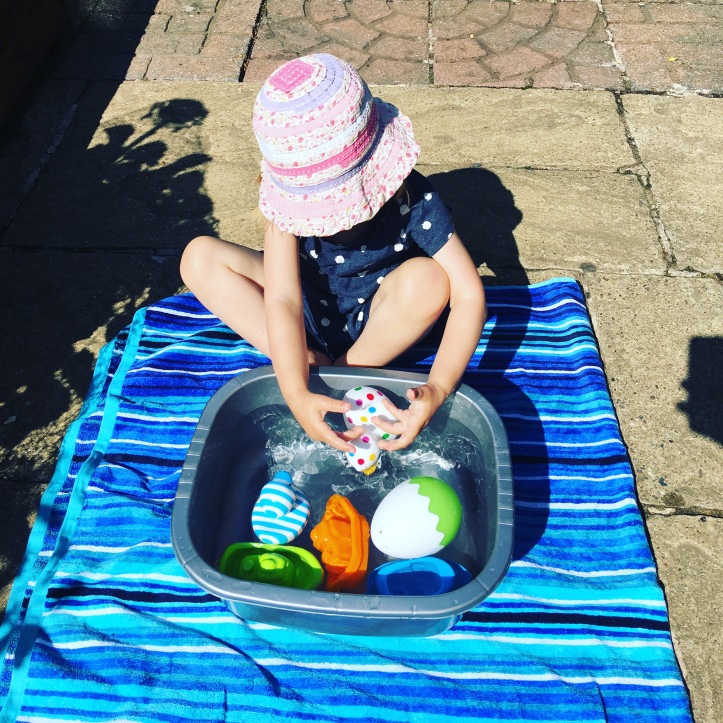 We came home to have a fairly quiet weekend relaxing at home and doing some gardening, and then it was back to school for what is always one of the busiest half-terms of the year. The few weeks before Christmas are always chocca, but I think this half term with its school trips, sports days, summer fairs, and so on gives it a run for its money. Anna has a fortnight of daily swimming lessons with school, so I actually feel like I’ve spent most of my time in the last week washing and drying towels and swimsuits!

I’ve also seen my rheumatology consultant, and there is a possibility that I could be suitable for a clinical trial of some drugs which he believes could really help with my AS, both in controlling symptoms now and also mitigating some of the longer term effects it can have. It’s a bit nerve-racking, and I might end up spending rather more time than I’d like going back and forth to the hospital for blood tests and so on, but it is also potentially very positive.

I’ve had quite a few people ask me recently what is happening with my writing, and when my next novel is coming. There isn’t really a short answer. I have been working on a book, the first draft of which is now finished, parts of which I love, and which has characters whose story I really want to tell. However, it needs a lot of work and editing to get it where it needs to be, and at the moment I am in a kind of limbo as my literary agent is retiring soon, so I will need a new agent, and my editor at Hodder has a new job, and her replacement won’t be starting for a while. I’m definitely at the point where I need some team effort with my book, and so I am hanging on until my new agent is in place and can give me some strategic (and hopefully metaphorical) kicks up the backside. In the meantime my brain is teaming with ideas and stories, and my biggest problem is  finding the time to actually write them down. Writing, and therefore working for myself, is in many ways an ideal career for combining with looking after the children, but the downside of no fixed working hours is that it takes an awful lot of determination and focus to carve out protected time for writing and then stick to it come hell or high water. I have struggled with that a bit recently, and my mission for September, when Sophia starts nursery, is to well and truly get myself back in the writing saddle.

And in my final, and possibly most exciting, piece of news: My peony plant flowered! Aren’t they just exquisite? 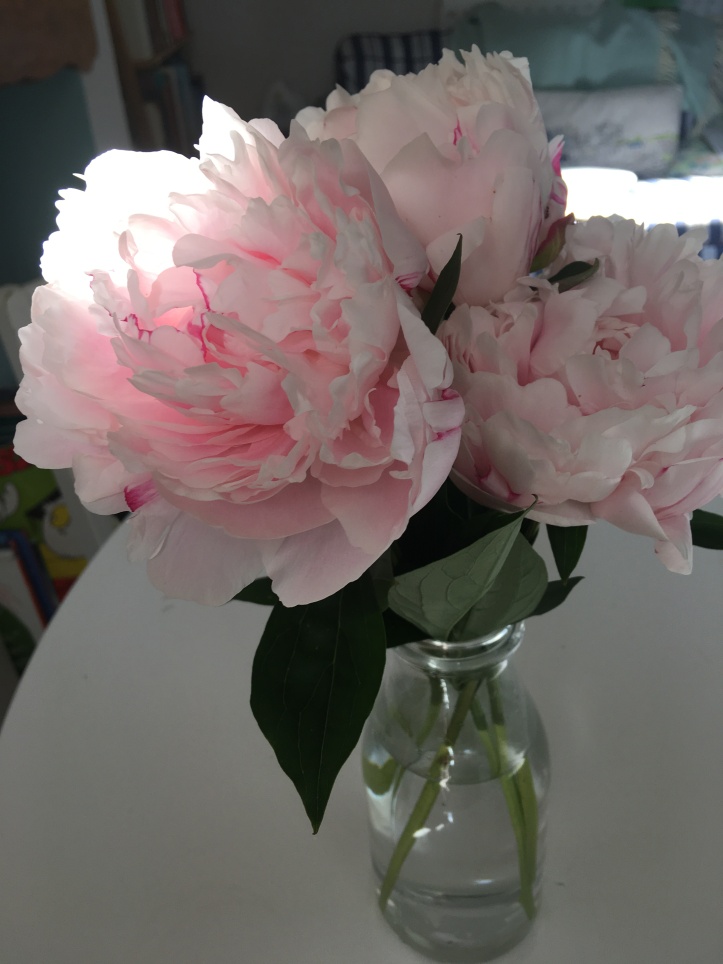 So that’s where I am as we approach the halfway point of 2018!

Officially Middle-Aged when you:
Last autumn my then 5yo wanted to plant an acorn she found. Tbh I didn't expect anything to come of it, but I gave her a pot and some compost, and thought no more of it. Then when I was doing some gardening at the weekend I found this.
Had lunch today in this hidden gem of a secret garden Caribbean restaurant in the Georgian Village on Wood St, E17. Delicious jerk chicken, curry goat and sea bass pizza, and such warm and friendly owners. My 6yo said at what point 'it doesn't feel like we're in Walthamstow any more', and the whole place really did have a holiday vibe.
First peony in bloom in my garden! Happy Friday everyone!
A no-make up, no blow-dry, no-filter selfie to mark my first leisure centre swim in a very long time. Covid rules meant the pool was blissfully clean and empty. And changing parenting times mean that I was able to book a 7pm slot and take my 12yo with me. It was a really nice way to spend time together.
First date night in about 18 months in a location well worth waiting for!